Fire Cone was a Garage Art Rock Band based out of Fredericksburg, VA. featuring Ken Crampton (drums), John Sweton (guitar), and Fritz Beer (bass). Other members included Alex Nunly (bass) and Missy Colombo (bass).
Fire Cone released one CD which is available below as a download. Hard copies are out of print.

Fire Cone was the brain child of John Sweton and Ken Crampton, two talented visual/tactile artists. Sweton, is an excellent sculptor, and a crunchy, punky guitar player, while Crampton, an amazing painter and graphic artist, is a Djembe instructor who moved to trap kit for Fire Cone. Both took a unique approach to their instruments and song writing for Fire Cone. They quickly wrote an albums worth of wacky, heavy, garagey material and along with Beer, recorded the album you see below.

From this album, “Asexual Creature” was featured in the film “Underbelly” (https://youtu.be/HYpTQjHMkxg). The song “Tabasco” received and official Cease and Desist Order from the  Tabasco McIlhenny Company of Louisianna.

Fire Cone played many infamous live shows usually identically dreassed in some unusual outfit they invented. Beer was eventually replaced by Missy Colombo on bass and with her played many more odd theme party type shows.

This was a classic garage band in that they placed style over substance, but with a lot of substance.

As Fire Cone themselves used to say “When Asexual Creature gets played, you’re gonna get laid”. That’s GARAGE baby! 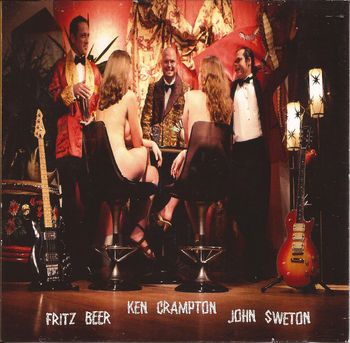 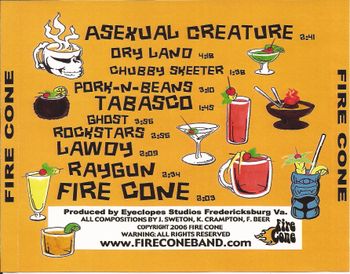 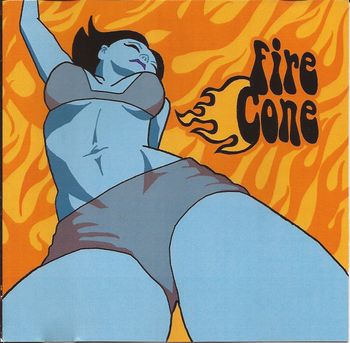